Past Presidents present at 20th Anniversary: 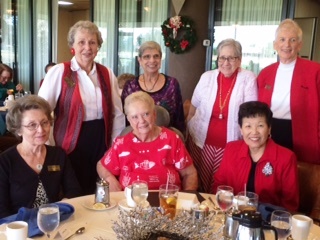 The following is a history of of CSC, as presented by Brenda Archambault at the annual Holiday Party held at Briarwood Country Club on December 15th, 2014.

Some of the other members in the first two years included Mary Oster, Sharron Lindsay, Susan Cagle, Julia Ayers, Doris Woolpert, Phyllis Cohen, Jane Hillman, Georgia Wolfe, Fern Persiani, Dorothy McGirr, Lill Mueller, Mary Felly, Betty Lomax and Bev Sheppelman.  When I joined, in the fall of 1995, I was given a questionnaire to fill out indicating my abilities as a “fine needleworker.”  I was such a novice that I didn’t know what stretcher bars were and soon found some other members were quite serious stitchers, extremely talented, carried tool kits for stitching, stressed the respect for copyrights, but were genuinely a wonderful group of women.  And, through the years, there were/are three men who joined the club.

It appears the first holiday party was a progressive luncheon held at the homes of Fern Persiani, Betty Lomax, Dorothy McGirr, Dorothy Maijala and Phil Bear.  Besides all the good food and drink served at each home, the members were afforded a tour of each home, enjoying the displays of stitching done by each hostess.

The club continued to grow.  By 1996 a “show” was held in the Acacia Room with chairs lined down the middle of the room, each holding a framed needlework picture propped against its back.  Tables were set up along the walls holding more needlework.  And the club was granted the use of the Palo Verde room on a weekly basis.  We were later moved to the Acacia room and eventually to Rom #5 at Kuentz.

Each year, as more members joined, the club added more events and activities, such as the welcome back party for the snowbirds in the fall, a second hand rose sale (the first of our annual stash sales), bus trips to the Phoenix area and to Tucson, house tours, the “leftovers” party the first Monday of January, a chocolate affair in February, teas, ice cream socials, a picnic in March, a summer survivors lunch in July or August, summer projects, and of course, the binennial needlework show, now grown and moved to Summit B at Palm Ridge.  Of course, in addition to the biennial needlework show, special exhibits showcasing member’s work have taken place in the library, the visitor’s center and hospital.Our first community project was the completion of a round-robin started by Doris Woolpert.  After she passed away her husband asked what to do with it and a small group finished the project and presented it to the Rec Center to hang in their offices.  Other projects have been stitched, framed and presented to Benevilla, RHJohnson Library, SCW Visitor’s Center, SCW Posse, Banner Del Webb Hospital, the Louisa Kellam Women’s Health Center, and when complete, the SCW Fire Department.

Now, as we mark the beginnings of our next twenty years, it is fitting that we honor our past presidents, without whom, leadership of our club would have been missing.  They are, in order of their service to Creative Stitchers: